Have you ever wondered how easy or difficult it is to become a police officer? Well, i can’t say that it’s one of the easiest careers to pick up, especially if you are naturally afraid of tests and exams.

I’m saying this because you will not only be required to perform a series of tests and exams, but also pass them satisfactorily for you to advance in the hiring process. Among the tests that you will be required to pass in order to become a cop is the police polygraph.

Am i saying that the agency doesn’t trust you? Well, you’ll be handed a gun with live ammunition, so you can’t blame them for being thorough. You have to show that you aren’t a psycho path, and the lie detector test, as well as the psych test are commonly used by law enforcement agencies to gaze your overall mindset.

It’s not just police officers who are required to sit through very intrusive polygraph test questions, but federal agencies like the FBI, DEA, ATF, as well as state police candidates, and U.S. Customs and Border Protection have to pass the polygraph before they are hired.

Since passing the polygraph exam is extremely important if you wish to work in law enforcement, allow me to familiarize you with the lie detector test. 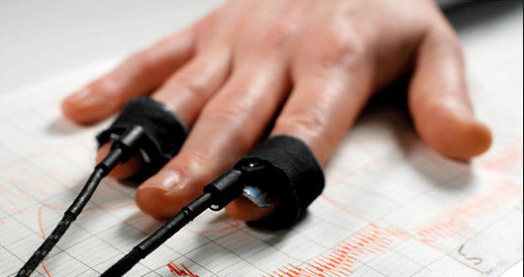 Research shows that the people are against the polygraph examination requirement for entry into law enforcement. Just to illustrate this point, they aren’t even admissible in court and dreaded by both criminals and police applicants, who I believe would rather go through an agonizing root canal than sit through a round of police polygraph questions.

Personally, I don’t believe that police polygraph test questions do what they were actually designed to do flawlessly, which is to weed out liars and fabricators from the pool. I’m saying this because I’ve witnessed many potential police officers get disqualified because of their polygraph result.

Yet in many instances, the applicant were being truthful. In fact, statistics show that polygraph exams are not 100 percent accurate in detecting lies, yet many local and state agencies persist to use this ancient screening tool to reduce applicants.

Seeing that pre-employment polygraph exams aren’t going away anytime soon, it would be best if I shared with you how to prepare for a polygraph test. But first, let’s look at what a polygraph is, why it is so intimidating, and the reasons why the polygraph test remains a crucial part of the hiring process.

What is a polygraph? 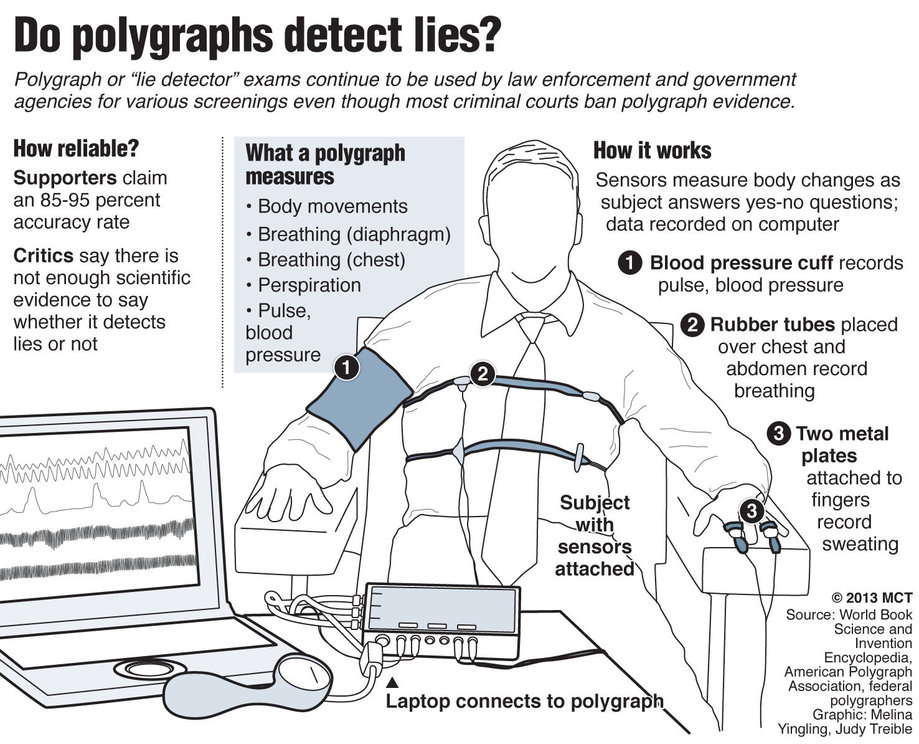 Let’s start by stating that a polygraph has no way of detecting a lie. On the contrary, the polygraph system, which could by the analog – antique model, or the modern computerized box, gathers physiological data from three specific areas of your body.

This is done by placing two rubber tubes over a candidate’s chest and abdomen, to measure your breathing activity; attaching two splints to your fingers in order to record sweat gland activity; and wrapping a blood pressure cuff around your upper arm – similar to what physicians do – to measure cardiovascular activity.

The theory behind the operation of a polygraph instrument is that people tend to get quantifiably nervous whenever they lie. So, the examiner can measure and record your physiological responses, like pulse, breathing rate, perspiration, and blood pressure.

A polygraph examiner is basically a highly trained interrogator with technical expertise, who applies his or her own experience, coupled with the readings of the instrument to detect how truthful your responses are. Does that sound scary yet?

What is so intimidating about taking a polygraph test?

What right does the examiner have to ask personal questions that may not have anything to do with your career? I can guarantee you that you will be feeling like this for the entire duration of your exam. Police applicants are almost always a complete train wreck when it comes to handling lie detector test questions.

This is partly because your privacy has already been invaded, physically, and the examiner doesn’t seem to stop with the questions. Well, this is exactly what the agency wants: for you to feel helpless, and the examiner to have full control! So, just prepare for complete humiliation, extreme interrogation, and coercion. Obviously, none of this is ever done to a suspect, let alone an ambitious, bright police applicant.

So, why is the law enforcement polygraph exam necessary?

As I mentioned above, the polygraph test brings fear to both criminals and police applicants in equal measures. For the latter group, this fear translates to the need to reveal anything that could cause you to fail the test. This moment of whole-hearted openness usually occurs either before the exam begins, or afterwards, in an effort to explain the reason why you may have failed. Lemme give you an example:

Say I smoked pot in college at a moment of weakness, maybe due to peer pressure. I am obviously not addicted or even dealing drugs, but when several lie detector questions try to find out my prior or current involvement with drugs, I would obviously be inclined to say that I have never used drugs.

However, the lie detector would show that I am lying, making me look like a frequent drug user or even worse. Considering that close to 25 percent of police candidates are disqualified at this stage, I would obviously have to confess anything that would appear incriminating to reduce my chances of elimination. You see how effective the polygraph test for police truly is? 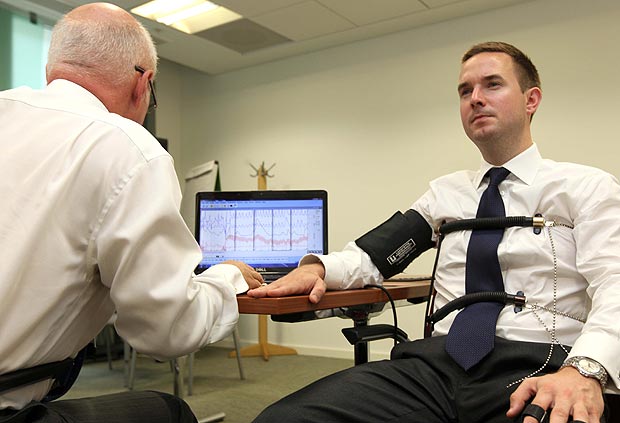 Let’s get down to the needy greedy of the polygraph. The first thing you’ll be required to do is complete a Pre Polygraph Questionnaire. You can get a sneak peak of what one looks like by visiting the University of Texas police department.

You’ll notice as you read through the questionnaire that there a lot of really personal questions. Make sure that you read it very carefully, and then respond in great details regarding the subject matter. For example, if you smoked marijuana in the past try to be specific on where, when, how many times, and etc. The bottom-line here is to be honest, and not try to hide your past indiscretions.

Those same questions will be used during the actual test by the examiner to grill you, so make sure you are upfront in the questionnaire.

There are several common polygraph questions, like “is this the month of March?” and “are you planning on telling even a single lie on this test?” You can also expect questions like “have you ever stolen from your employer?” or “have you ever paid for sex?” and a few more.

The list of polygraph questions for police is usually written for you and other candidates for the sole purpose of that interview, though the wording may be changed for different candidates.

You should know that police lie detector test questions are asked three times with short breaks between each questioning segment, and about 30 second pause between questions. The order of questioning may be changed, though no additional question will be put on the list.

Just before we bring this to an end, I should give you a few tips on how to prepare for polygraph interview questions. First, make sure you get a good night’s sleep: 8 hours should be enough rest.

Second, don’t do anything out of the ordinary, like skipping meals, jogging, or anything unusual. Just stick to your routine to avoid any negative reactions.

Thirdly, concentrate on the questions: don’t listen to your heartbeat, or sensations, or even focus on how upset you may be.

Fourth, think about each question at a time: focus on the question that has been asked and nothing else, like a slippery-stepping stone in a river.

Finally, this is probably the most important advice out of everything – breath normally and TELL THE TRUTH.

All the best when tackling the polygraph examination questions, and don’t be afraid of the thousand mile stare you’ll get from the examiner. Don’t be afraid. Good luck!